“WE'RE ACTORS — we're the opposite of people!” 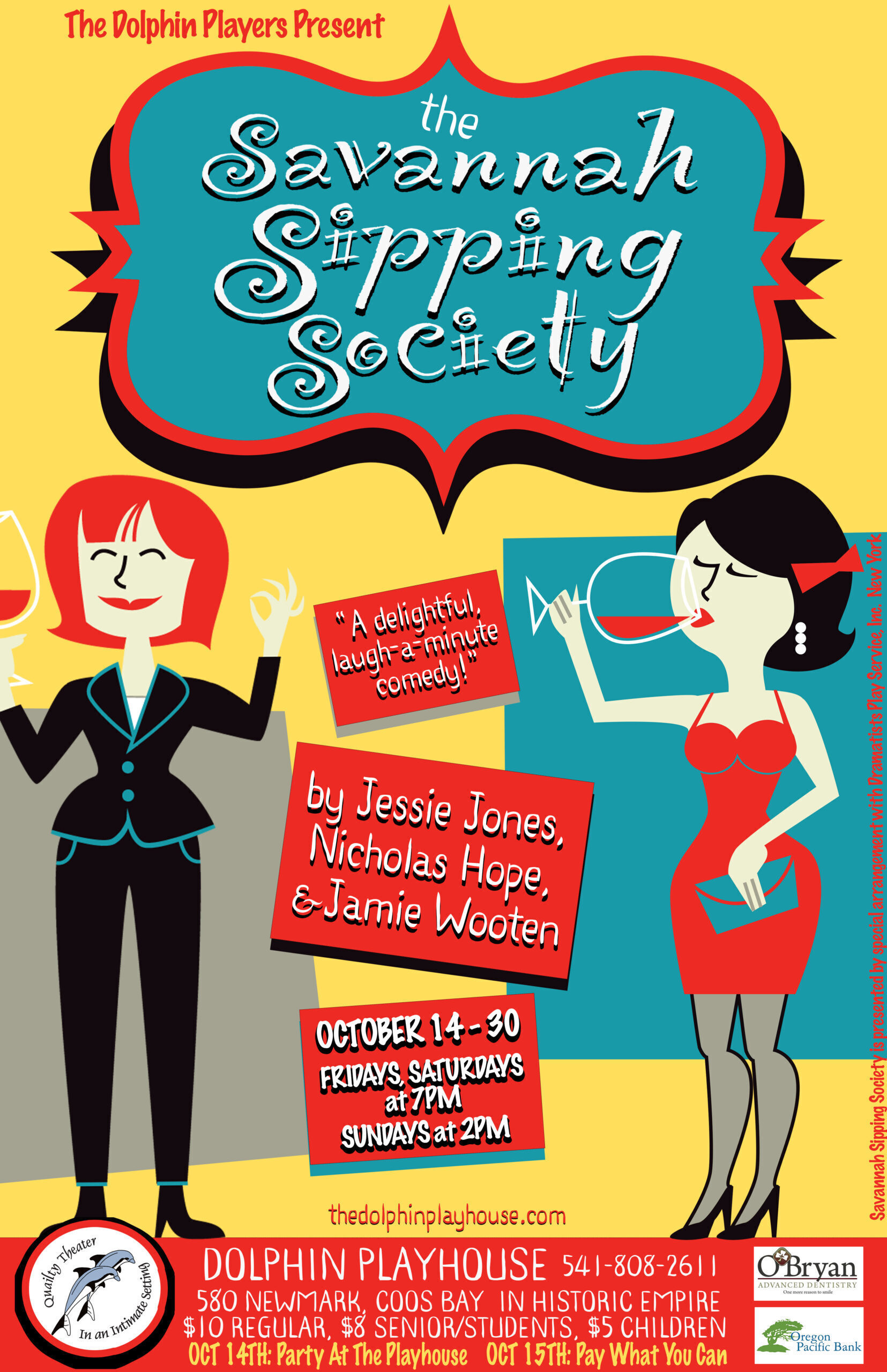 Put four Southern women together with some good old-fashioned Kentucky bourbon, and lots of laughs ensue in the upcoming Dolphin Players production of   Savannah Sipping Society, by Jessie Jones, Nicholas Hope, and Jamie Wooten.  The delightful comedy opens October 14, with the annual funddraiser Party at the Playhouse, and runs through October 30.

In this laugh-a-minute comedy, four unique Southern women of a certain age, all needing to escape the sameness of their day-to-day routines, are drawn together by Fate—and an impromptu happy hour—and decide it’s high time to reclaim the enthusiasm for life they’ve lost through the years.

Over the course of six months filled with laughter, hilarious misadventures, and nonstop liquid refreshment, the women successfully bond and find the confidence to jumpstart their new lives.  Together they discover lasting friendships and a renewed determination to live in the moment and, most importantly, realize it’s never too late to make new old friends.

The October 14 performance is the Party at the Playhouse, and October 15 is Pay What You Can, as is always the first Saturday of Dolphin Playhouse productions.  Committed to the belief that everyone should be able to share theater, the Dolphin Players established a tradition when the Playhouse opened in 2012 of providing one performance per production in which admission is by donation only.  This is a great option for families and people on fixed incomes.

Masks are recommended but not required, and there is no vaccination requirement for this show.  During the COVID break, improvements were made to the theater’s ventilation system, increasing safety and comfort.

The Dolphin Playhouse is located at 580 Newmark in the historic Empire district of Coos Bay.  Reservations may be made by calling 541-808-2611, and tickets are usually available at the door.  Tickets may also be purchased on the website  thedolphinplayhouse.com.

If you’ve ever wondered about what’s behind the magic of theater, perhaps this is the time to find out.  The Dolphin Playhouse needs volunteers in all aspects of production, from the box office to the stage to the lighting booth to backstage.  It takes a lot of talents and skillsets to produce a play and to operate a theater, and sometimes it just takes time and energy, with no particular talent needed.

One of the side-effects of the COVID pandemic was the loss of live theater, and now that it’s possible to perform again, many of the dedicated actors and other volunteers have moved on.  So the theater is looking for new performers.  (See our article about auditions for  Rapunzel.)  Another immediate need is for box office and concessions volunteers.   In fact, we could use a few more people to help with these positions for  Savannah Sipping Society.

There’s also a great need for volunteers who are never seen by the audience:  the costumers, lighting crew, set builders and painters, prop builders and gatherers, and publicity staff.  Perhaps your special skill is in organizing.  That’s one of our biggest needs.  Right now, we are organizing costumes and props, but we have a play library crying out for help, and it would be so great if someone would take charge of the tools and materials we use to build sets.   Our lighting manager would love to train one or two people to hang and focus lights and teach lighting design.  Maybe you enjoy meeting people and would enjoy putting up posters.  Maybe you could paint a mural for the last board on the side of the theater.

Finally, there’s opportunities for people who would be interested in the management side of the theater—from keeping the books to cleaning the parking lot, stocking the paper towels, and mopping the floors.

There’s a job at the Dolphin Playhouse for anyone who wants to help.  To volunteer, email us at  dolphinplayers@gmail.com, call 541-808-2611 and leave a message, or send us a message through Facebook.  Or fill out a volunteer form while you’re attending a performance of  Savannah Sipping Society or any of our upcoming productions.

True to Panto tradition, the Rapunzel production will use cross-gender casting, physical humor, sight gags, music, and talking animals.  Peg Boots and Alice Carlson will again direct the production which will run the first three weekends of December.

Auditions will consist of cold readings from the script.  A talent for singing is a plus, and singers are encouraged to bring a prepared song.  An accompanist will be available, or singers can bring recorded accompaniment.

For more information or to volunteer to work on the production, email  dolphinplayers@gmail.com or call director Alice Carlson at 541-756-7290.

Past productions have ranged from Cabaret  to classic radio.  The selection process begins with submission of a play proposal, followed by a presentation to the Dolphin Players board of director.  If a proposal is selected to be part of the season, the director will be supported throughout the process by Playhouse staff.   Experience in directing is not required, and unpublished manuscripts will be considered.

For more information and  a play proposal form, please contact Alice Carlson, Managing Director, by email at  dolphinplayers@gmail.com or leave a message at the theater 541-808-2611. 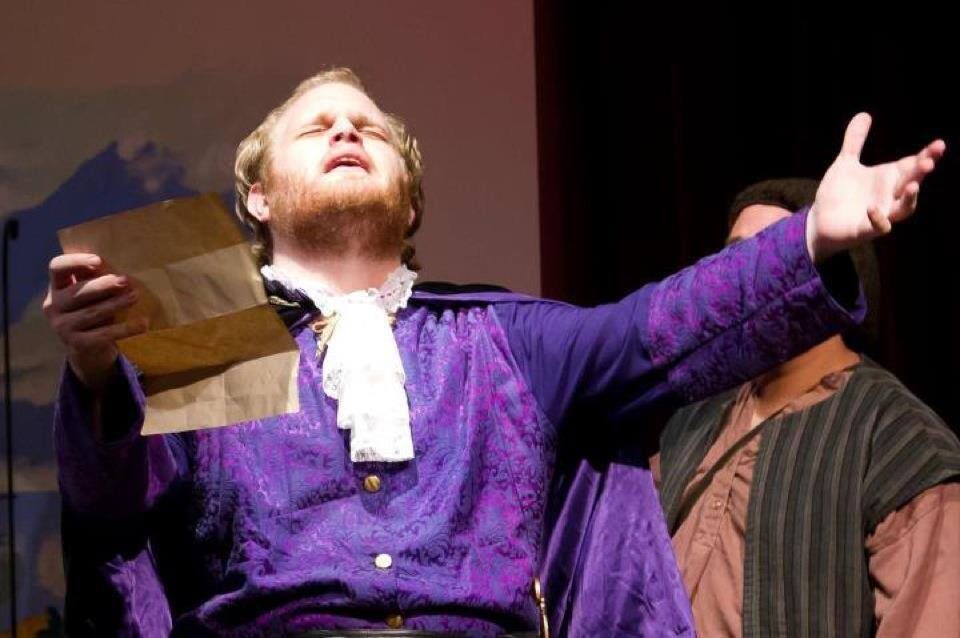