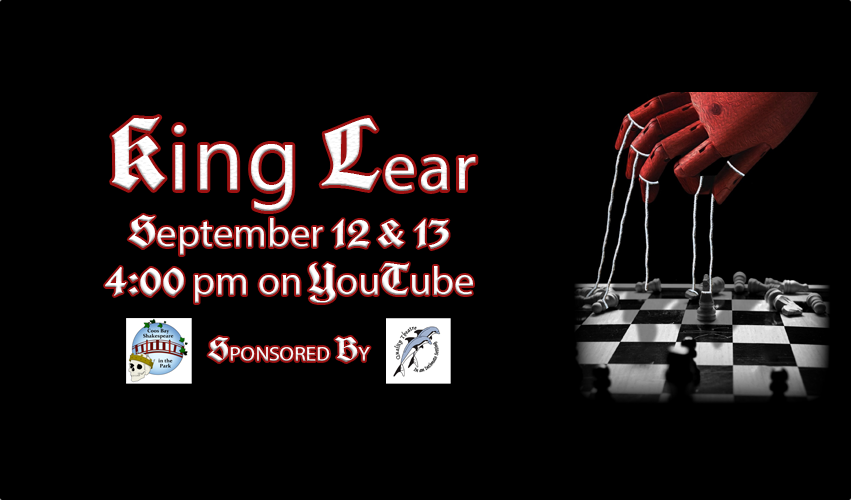 This spring, we found ourselves abruptly launched into a new way of vife.  The COVID Pandemic floods the world, and our country’s response has been hampered by deep moral divisions exacerbated by self-interested marketing and political posturing.  As Gloucester says, “Machinations, hollowness, treachery, and all ruinous disorders follow us disquietly to our graves.” The sparks of racism, ageism, religious friction and sexism have all been fanned to an angry inferno by systemic poverty and manipulative leadership.  The young blame the old for history and the old blame the young for current events.  “Love cools, friendship falls off, brothers divide; in cities, mutinies; in countries, discord; in palaces, treason; and the bond cracked ‘twixt son and father.”

Shakespeare’s “King Lear” is play written over four hundred years ago based on a story that was ancient when the play was written.  Yet, as so many of the bard’s plays do, it provides a lens to examine many of the issues we face today.  The sharpest and most difficult part of this pandemic, for many of us, has been the enforced separation from the people we love.  Things we took for granted – random gossip with coworkers, meeting for meals. . . physical touch – are gone.  For this reason, the format of Zoom becomes part of the play; Lear’s Albion is a world where there is almost no direct physical connection between any character unless it is in violence.

The audience for this show is currently overwhelmed with a storm of news of escalating violence and ambiguous causes.  Class divisions are sharp and wealth is concentrated to a very few.  The storm on the heath that brings Lear, the Fool, Kent and Poor Tom together is a hopeful metaphor for the storm of events we face in the real world.  Before the end of his time in the storm, Lear has an epiphany about the situation of those without shelter:

“Poor naked wretches, wheresoe’er you are,

That bide the pelting of this pitiless storm,

How shall your houseless heads and unfed sides,

Your looped and windowed raggedness defend

From seasons such as these? O, I have ta’en

Too little care of this. “

As protests throw slogans back and forth about who matters, or who matters more, King Lear also depicts moral ambiguity surrounding the class assumptions that existed when the play was written.  The characters we hate have legitimate complaints: Goneril and Regan are frustrated because after abdicating, Lear keeps trying to rule.  Edmund is angry at his relegation to a lower social status based on his birth.  Their respective failures – Goneril and Regan fail to rule competently and Edmund fails to behave in a way befitting a nobleman – seem to detract from the legitimacy of their motivations.  But Edmund, in particular, is introduced as the audience’s connection to the play.  He’s given very nuanced treatment for a villain, and is redeemed before his death.  This, and the general goodness of the servants and commoners in the play create a theme that at least examines the assumptions made about class and wealth.  “Let the superfluous and lust-dieted man. . . . that will not see because he does not feel, feel your power quickly.  So distribution should undo excess and each man have enough.”

Without focusing too much on the feminism angle, the casting of this Lear and her Gloucester does highlight the contrast between the sexism in the language of the play against the more feminist bent of the actual story. The cast does not change the pronouns in the script – in Lear’s world, to be masculine is to be strong and ‘greater than’, and to be feminine is to be weak and ‘less than’. This is not so far off from our own world, though it is thrown into stark relief by the cross-gendered casting, because in this Lear’s world, masculine or feminine descriptors have nothing to do with biological sex.   On the one hand, all three of Lear’s daughters, rather than their husbands, are the clear leaders of their respective factions in way that was even rarer in Shakespeare’s time than it is now, not withstanding Queen Elizabeth I.  On the other hand, Lear, the beloved, aging warrior king, played beautifully by Melanie Allen, bemoans “the mother” rising inside her as weakness, and fights against “womanish” tears.

The two zoom performances of King Lear will be live, accessible on Youtube.  One of the goals of this production has been to keep the added challenges and risks of live theater, rather than presenting what would effectively just be an edited amateur film.  The cast has put in a tremendous amount of time working on text, meaning, sound and rhythm as well as character and motivation.  This play is filled with glorious, evocative sounds, which this cast of beautiful voice makes into words, which become poetry and story.  It is our hope that audience members will set aside the time to relax with their devices and enjoy the beautiful sounds and tragic story of King Lear, a zoom play sponsored by the Dolphin Theater and Coos Bay Shakespeare Company.

© 2020 The Dolphin Playhouse. Created for free using WordPress and Colibri